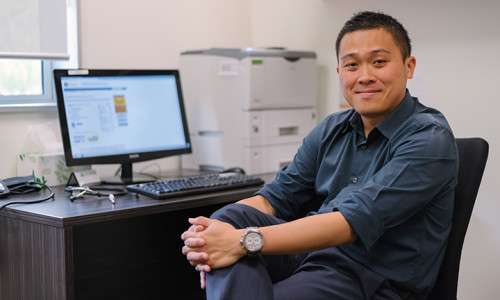 Originally from Malaysia, Marcus graduated from the University of Auckland’s School of Medicine in 2006. He worked for 3 years in varied specialties as a house surgeon at both Auckland & Waitemata DHBs. Subsequently, he also received training as a Surgical Pathology Registrar at Medlab Central in Palmerston North Hospital between 2009 – 2010.

He then worked at several private Accident & Emergency centres around Auckland, prior to commencing vocational general practice training at the beginning of 2011, and attained Fellowship of the Royal New Zealand College of General Practitioners in 2014.

Outside his general practice consultation times, Marcus also pioneered sleep clinics at Silverdale and Millwater medical centres, after completing the Fundamentals of Sleep Medicine course at The University of Sydney. He has also completed training from SleepGP Australia in nasopharyngeal endoscopic assessment of obstructive sleep apnoea (OSA). Marcus is a member of the ASA (Australian Sleep Association). His vision for the sleep clinic is to provide comprehensive and evidence-based diagnostic and therapeutic services for patients with sleep problems ranging from insomnia, restless leg syndrome to snoring & OSA, in primary care.

Marcus believes primary care is like an individualized “wellbeing contract” between the patient and his/her GP, through mutual agreement, understanding and working together towards achieving the same goal, and ultimately, the best outcome for the patient.

Besides English, he is also well versed in both Mandarin and Cantonese, hence can cater for the needs of the community requiring this service.

Marcus is happily married to his wife Vanessa and they have two young children; a daughter and a son. His family lives locally in Orewa.

Outside of work, he is deeply involved with a non-for-profit badminton association at North Harbour Badminton, promoting competitive badminton at amateur level to the community north of the bridge.

Silverdale Medical is a modern purpose-built clinic offering a full range of medical services at the crossroads of Silverdale, Orewa and Whangaparaoa.

We have on-site pharmacy, x-ray, physiotherapy, dentist and specialist clinics.